Important : Due to the health crisis we are experiencing because the Coronavirus, shipping costs are reduced  for the coming months.

To quench his thirst, drinking water,

To dispel his worries, the wine is beneficial,

But to clear the mind, tea is like no other...

The Tang dynasty Chinese author. He is mainly known for his book "the classic of tea", edited in 780.

Because the Nepal tea is a rich and remarkable quality while there is very little known in France.  Planting areas are located in four districts in the East of Nepal, Ilam, Terathum, Dhankuta and Panchtar. The tea gardens are located at an altitude that varies between 1,000 and 2,000 meters above the sea level and produce one of the finest teas of the world.
We intend to publicize the Nepal tea, including the region of Ilam, to the East of the country, where cultures, aloft, cover a magnificent undulating relief.
The richness of the productions associated with passion and professionalism of the producers encourage our wish to make you discover the original flavours.
Moreover, the sale in France of the Teas from the region of Ilam also responds to our concern to contribute to social and economic development of a region (and country) relatively poor (see social Impact). Thus, the teas offered here all directly from cooperatives in the region of Ilam.

For you... and your loved ones

All our teas of Nepal are natural, there is   no added chemical product, no artificial additives, no flavor enhancer. Nepal Dream Tea offers a limited number of teas, but the catalog can get rich during the developpement of our approch.
In addition to the green and black tea, we offer a set of teas flavored with natural spices or flowers, whose scents will not only inspire you.
Moreover, our teas are presented in bags in fabrics (cotton or cotton more silk) toallow the preservation of tea of humidification and developp our project to make tea a gift idea for you...and you loved ones.

The benefits of tea

By reading journals, there are serious studies have shown that tea was involved in the prevention of the development of some cancers (skin, breast, lung, esophagus, stomach, lung).
As well, many epidemiological studies have shown that black tea reduces the risk of developing cardiovascular disease. Taking of 3 cups of black tea a day reduced the risk of heart attack in the order of 12%. Tea, rich in antioxidants, primarily flavonoids and catechins (polyphenols), these have an effect on the functions of the blood, and in particular the agreagation of platelets whose dysfunction is originally from clots (thombus) clogging the arteries. It seems that a black tea intake reduce platelet aggregation in the order of 15%.

On the other hand, the antioxidant effects of catechins play a role in the prevention of aging and osteoporosis.

Researchers, including nutritionists, also noted that the consumption of green tea fight the insulionoresistance and may participate in the regulation of the weight (1). The ability of green tea to increase energy expenditure and fat oxidation seem to specifically due to the presence of catechins, the antioxidants in the tea. For more, during dieting, drinking tea, limiting the decline in energy expenditure due to the low energy intake, promotes weight loss faster and limit weight end-of-regime resumed successfully.
[1] wolfram S. Anti-obesity effects of green tea: from bench to bedside. MOL Nutr Food Res. 2006 Feb; 50 (2): 176-87.

All the quality pickings are at hand, essentially by women whose dexterity is remarkable. Men take care of the maintenance of the plantations.

Pick-ups are held throughout the year, even if the spring harvest is the most abundant and certainly more tasty and expensive... Yet some summer or autumn harvest (black and oolong) are remarkable for their softness and delicacy. The dilemma is simple for the Tapper: more the leaf is young and fresh, more she's tender and tasty... but she is small and light, and sells tea weight! It takes 5 kg of fresh tea to get 1 kg of manufactured tea, which can be an hour or several days of work depending on the type of collection... An experienced picker in Manual harvesting Imperial can reap better 600 gr of leaves of green tea per day. A kilo of a grand cru class to pick about 60,000 young leaves and take at least 20 hours of manual shaping.

For full details of the universe of tea, I refer you to the excellent website of Marc Ferré.

Clothbag with green tea of Ilam 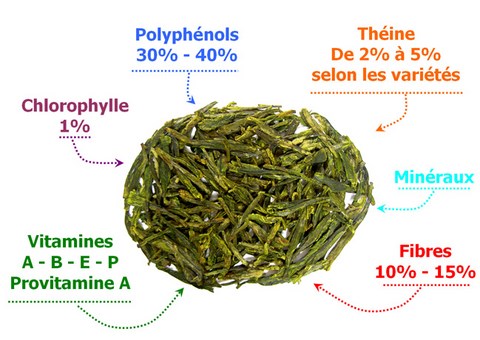