The influence of the Indian neighbour... 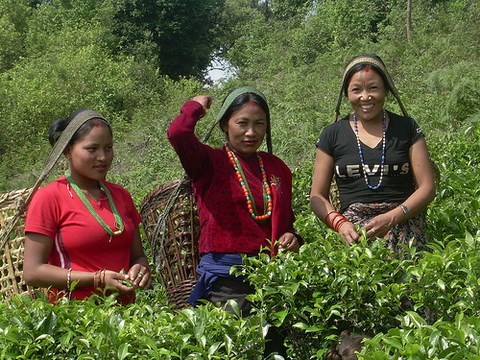 About 1873, colonel Gajraj Singh Thapa, son-in-law of the famous Prime Minister Jung Bahadur Rana, was on a trip to Darjeeling. He was impressed at the sight of young plants of tea and this pleasant drink they were offered him everywhere he went. He then decided to cultivate the tea plants in the city of Ilam.

Gajraj Singh Thapa was the Governor-General of the East of Nepal. His stepfather had awarded the entire district in the form of a 'birta"(a free land rental). Soon the colonel made to implement two plantations: Ilam and Soktim Tea Estate of 52 hectares each and thus began the Nepali tea industry. First Nepali tea production was an Orthodox tea of the hills. The Nepal tea industry was at the time of the domain of the Government and this until around the beginning of the 1990s.

In 1985 the Government declared five districts of Eastern Nepal, Jhapa, Ilam, Panchtar, Terhathum and Dhankuta 'Tea Zone' (the Region). With the exception of Jhapa, all these districts were located in the hills. After the liberalization of the economy the private sector began to invest in the tea industry. Between 1985 and 1999 most of the development consisted in the creation of three new areas of plantations and seven new factories. Later, in 1997, his Majesty of the Nepal's Government decided to privatize the public sector of plantations and factories.

All these years the Nepal tea industry was gradually. In 1920 there were only two plantations occupying an area of 120 hectares. Today tea gardens covers an area of 16 000 hectares approximately. The production also strongly increased by slightly more than 2 tons in 1920 to 140 000 tonnes approximately today. This industry employs about 25,000 people.

Planting areas are located in four districts in the East of Nepal, Ilam, Terathum, Dhankuta and Panchtar. Most of the tea plants are hybrids of the variety Chinese "Camellia sinensis". The tea gardens are located at an altitude that varies between 1,000 and 2,000 meters above the sea level and produce one of the finest teas of the world.

The climatic conditions of the hills are perfectly suitable to produce Orthodox tea, while the plain to the South of Terai produces only tea CTC (Crush-Tear-Curl).

In recent years, some Nepali tea producers took up the challenge of the production of the Organic Tea (organic tea).